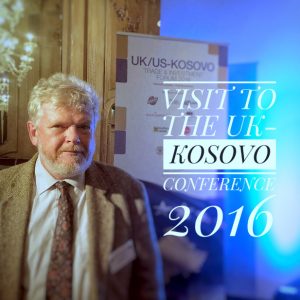 Having lived in Bosnia and Canada, subsequently a finished products commodity trader in a Yugoslav trading company in London (turnover £200m), John Shirley tumbled into international freight when the company in question turned out to be mainly Serb and was then closed under UN sanctions in 1992. Years later he helped the Sunday Times defend themselves against a libel action by the managing director. They had discovered evidence that pointed to him donating to the Tories and also to Arkan, the notorious warlord.

John was offered work in Dover by a clearance agent whom he had used for imports. He quickly established, by talking to drivers from former Yugoslavia at customs in the port, that the majority were going out from the U.K. empty having made their deliveries, to re-load in Holland or Belgium. This could be from as far up as Glasgow.

At this time in the early to mid-nineties the wars in Croatia and Bosnia were in full swing with the consequent need to feed, clothe and house refugees then, eventually, to re-build the infrastructure in the war torn areas. It was expensive for charities and NGOs to hire and insure trucks to get their aid there. Learning of the empty trucks from former Yugoslavia and the low cost involved they snapped at the chance to use them. Through this agency and subsequently through John Shirley Ltd, then based in Willesborough, aid went from Dublin, Glasgow, Turrif, Bristol, Wrexham, London, Rotterdam, Aarhus, Nuremberg, Rennes, Paris , Naples, Gibraltar, Istanbul, Ziar nad Hronom, Balassagyarmat, Belgrade etc. in vast quantities, much of it paid for by the government of Japan in their first major donation programme.

Later, in 1999 to 2001, the exercise was repeated with Kosovo resulting in a doubling of turnover in 2000. At all times phone calls in Serbo-Croat to get trucks though borders and vetinary checks was imperative. Use of French, German and Spanish at the loading places was often a tremendous help. Since those hectic years the nature of traffic has become more commercial  however, the necessity to get trucks and containers to their loading places on time when there are a dozen or more volunteers waiting remains as aid is still being shipped although in much lower quantities except in the spring of 2016 when great quantities of blankets mattresses and tents were taken to the migrant camps on Lesbos, near Athens, Novi Sad, Skopje and Slavonski Brod and .Languages spoken: fluent Serb, Croat, Bosnian, French, Spanish, conversational Albanian and some German.

Our website uses cookies to improve your experience while you navigate through the website. Out of these, the cookies that are categorized as necessary are stored on your browser as they are essential for the working of basic functionalities of the website. We also use third-party cookies that help us analyze and understand how you use this website. These cookies will be stored in your browser only with your consent. You also have the option to opt-out of these cookies by adjusting the Cookie Settings, but by opting out of some of these cookies it may affect your browsing experience.
Necessary Always Enabled
Necessary cookies are absolutely essential for the website to function properly. These cookies ensure basic functionalities and security features of the website, anonymously.
Functional
Functional cookies help to perform certain functionalities like sharing the content of the website on social media platforms, collect feedback, and other third-party features. John Shirley Ltd. DO NOT currently use any functional cookies.
Performance
Performance cookies are used to understand and analyze the key performance indexes of the website which helps in delivering a better user experience for the visitors. John Shirley Ltd. DO NOT currently use any performance cookies.
Analytics
Analytical cookies are used to understand how visitors interact with the website. These cookies help provide information on metrics the number of visitors, bounce rate, traffic source, etc. John Shirley Ltd. do use analytics cookies when allowed.
Advertisement
John Shirley Ltd. do not use any advertisement cookies. Advertisement cookies are used to provide visitors with relevant ads and marketing campaigns. These cookies track visitors across websites and collect information to provide customized ads. John Shirley Ltd. DO NOT use any advertisement cookies.
Others
Other uncategorized cookies are those that are being analyzed and have not been classified into a category as yet. John Shirley Ltd. DO NOT currently use any 'others' cookies.
SAVE & ACCEPT
Powered by