John’s Brexit Concerns Heard in the House of Lords 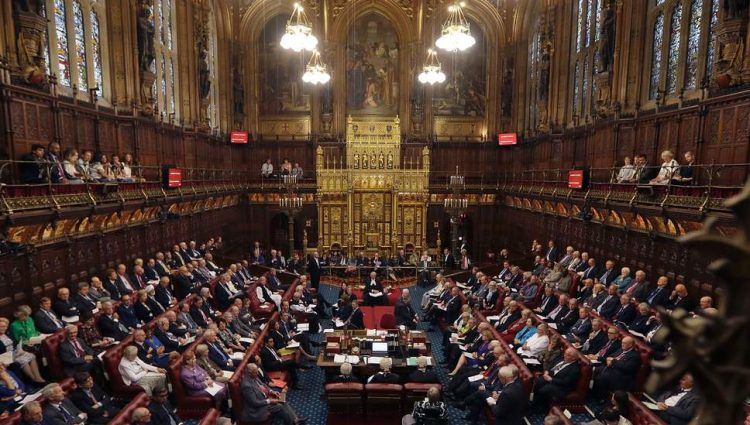 Letter to Cousin Dale, House of Lords, Westminster 6.11.17
Re: The nightmare of a hard-border
Dear Cousin Dale,
Please accept my apologies for seeking your assistance in promoting a hard Bremain on behalf of the hard-working, hard-pressed international freight forwarding community, in particular as regards the white paper on possible customs scenarios.
Should our worst nightmare of a hard border here in Dover be cursed upon us we shudder to think of the costs that will be inflicted on our international shippers and ourselves, in particular via the great monsters of delay and demurrage. Given that the latter is a word peculiar to the shipping industry, perhaps it would help you when talking to those concerned what sort of nightmare scenarios we envisage – a regression to 1993 when there were some 45 customs agents in Dover employing dozens of people thumping out entries night and day in badly lit offices on typewriters next to ashtrays full of old cigarette butts. They had their counterparts in equally mindless occupations in dingy offices all over Europe. These agents would have to pay homage to customs officers whose word was God. The slightest error in a customs entry would mean rejection.
Rejection would mean the truck standing not for hours, but for days and when it comes to lengthy periods of time which are not the fault of the driver or the haulier we are talking about late delivery to the offload point and demurrage. Currently the accepted amount for a truck stuck somewhere is £250 a day. This is just the bare minimum and we, as freight forwarders, broker the number of days payable by the shipper to the haulier. A truck costs a lot of money to buy or lease, insure and equip. They are driver accompanied and have to be kept running day and night in order for the haulier to make any sort of living. The demurrage does not cover the actual loss, it is just a form of mitigation.
As I think you are aware, John Shirley Ltd will be 22 years old in January. One of the reasons for such longevity is that a lot of our shippers are not limited companies which go bust with surprising regularity and when they do, the liquidators plunder in fees as high as £500 an hour, every last penny leaving unsecured creditors such as us with nothing. Charities, N.G.O.s, government arms and film studios have kept us going and in all cases be it directly or indirectly, they understand the need to pay demurrage.
To give you some examples: in February this year we had four trucks held at an airbase in Dalmatia for a fortnight and the USAF agreed to pay for every single day amounting to £14,000.00! This time last year Operation Christmas Child had three trucks stuck at customs in Belgrade, Serbia for three days costing them £2,250.00! In Kosovo 2 years

ago a truck with a load of humanitarian aid from a Kent charity called Seed was stuck at customs from the Thursday to the Tuesday, The haulier not only sought 5 days’ demurrage from us but also asked us to cover the £900.00 penalty they had been stung with for failing to turn up at the reload point at the agreed time and day.
In Britain there are quite a number of household names who like to externalise their costs. If the driver turns up at one of their warehouses half an hour early the haulier or shipper gets fined; if he turns up half an hour late again there is a fine. If the truck has come from outside the EU, gets stuck at customs in Dover and misses his timed booking altogether the warehouseman for the household name can sometimes turn around and say “We can’t take the truck now till Friday at 16.50” and it is only Tuesday! This is a huge cost to the haulier! We, as freight forwarders, may have booked the truck to reload say, Christmas shoeboxes in Dundalk on the Wednesday evening for Kiev. It may be that the haulier fails to tell us of the delay and we only find out on the day, meaning that the Irish shoebox campaign, will have thirty volunteers in some draughty church hall screaming down the phone at them!
Third Country Permits (CEMT)
Cousin Dale, I would like to bring to your attention what may happen to British hauliers if they are put in an identical position to hauliers from say Bosnia or Serbia who have to obtain third country permits in order to load in say Italy for Holland. There are only limited numbers of the CEMT permits issued to the ministries of transport in Sarajevo or Belgrade and they share them among the hauliers. A haulier with ten trucks will typically get only one permit and that permit is supposed to remain with the driver the whole length of the journey. If British hauliers are outside the EU they will no longer be able to load from here to Budapest for example, then reload for Paris and again reload back up to Manchester unless they have a CEMT permit. These permits are not universal for the EU. Depending on their normal routes British haulier may need a Hungarian CEMT, an Italian CEMT and or an Austrian CEMT. Britain will have to negotiate with all 28 countries individually – what a waste of time and money!
IPR & OPR
Cousin, I am not sure of the amount of clothing made in the EU for British high street stores but I imagine it is a substantial amount. We want to avoid exiting just for the sake of the rag trade alone! To illustrate: a designer sends drawings and trimmings from Manchester to a Macedonian factory (outside the EU) where they make up twenty types of jackets and thirty types of skirt. These are loaded on what we call a hanging garment vehicle and when it arrives in Dover the entry clerk has to deduct from all the different types the amount of green buttons or red buttons or blue lace or red piping that went out to the factory from the cost of each and every finished garment. The entry can run to many pages and take all day to prepare!

There has been talk of electronic entries. This is irrelevant if clerks still have to prepare them. My colleagues at Channel Ports advise that 10,000 trucks a day are now passing through Dover and the Eurotunnel and only 1% undergo customs clearance. This is 400% more than in 1992 when they all underwent clearance. At that time there were 2,000 clerks in East Kent, now there are only 200! The average clerk can prepare only 30 to 50 normal customs entries in an eight hour shift. Working this through, it means that 8,000 customs entry clerks will be needed to cope with the daily influx of 10,000 trucks into East Kent and 8,000 of their counterparts will be needed across Europe to prepare import or export entries. It takes a year to train a clerk to learn the basics!
Our station building is across the tracks from Dover customs. We do not want to be surrounded by 10,000 truck on day one , 20,000 on day two, thirty thousand on day 3; need I go on?
For the sake of forwarders and customs brokers let us stay in the EU!
Best regards

Interview with John Shirley on the Evening News (BBC 7 dec 2018.) RE Brexit

Brexit: 130 executives including John Shirley sign a missive published in the Times Newspaper